I95, in Waltham, Massachusetts

The highway now known as Interstate 95 has had several names through the years. First open to traffic in 1951, it has been known as the Yankee Division Highway, and locals still refer to it as Route 128. In the 90's it was promoted by the state as "America's Technology Highway", for the high-tech electronics and computer companies in the area. Now 4 lanes north and south through west Waltham, it has 3 exits. Exit 26 connects to Weston Street (Rt. 20), the fastest route to Main Street. Exit 27 goes west to Winter Street and east to Totten Pond Road. The northernmost exit 28 connects to Trapelo Road. 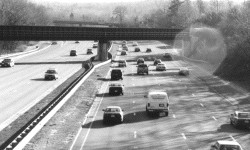 View south from the Main Street bridge. The first bridge in the photograph is for the railroad. The further one is part of the Rt. 20 rotary.

Map of major streets and roads